Emperor neither thought of his death nor wanted the people and soldiers to waste so much labour and property for him, so he did not have his tomb built.

Location: Tomb of Thieu Tri lies in Chu Chanh Village, Thuy Bang Commune, Huong Thuy District, about 8km from center of Hue City.
Characteristic: The tomb can be divided into two parts: the tomb area and temple area.
After being on the throne for seven years, Emperor Thieu Tri was sick and died on 4 November 1847 at the age of 41. In his lifetime, the Emperor neither thought of his death nor wanted the people and soldiers to waste so much labour and property for him, so he did not have his tomb built. 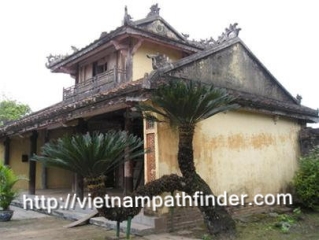 As soon as coming to the crown, his son Emperor Tu Duc had the royal geomancers to seek land for his fathers tomb. On February 11th 1848, the construction started, and 10 months later, it was completed.

The tomb can be divided into two parts: the tomb area and temple area.

On the right with Nhuan Trach Lake is the bronze gate leading to big Binh Dai (Honour Courtyard). The two rows of stone statues on the left and right of the court are typical of the sculpture art in the first half of 19th century in Hue. Then, one can see Bi Dinh (Stele Pavilion) and Duc Hinh Tower on a tortoise-shell-shaped hill. Ngung Thuy Lake looks like a crescent moon barring in front, the walls of the tomb itself (Buu Thanh). Across the lake are three bridges: Chanh Trung (in the middle), Dong Hoa (on the right), Tay Dinh (on the left) leading to the stairs going to Buu Thanh. 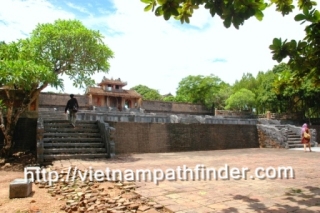 It was built separately, 100m from Duc Hinh Tower, on the left. After passing the marble gate and another three steps leading to Bieu Duc temple, visitors will go through Hong Trach gate. In the middle is Bieu Duc temple, where the funerary tablets of the Emperor and the Queen Tu Du are worshipped. In the main temple, on the edges of the roof and Hong Trach gate, are engraved over 450 word boxes including poems with educational and literary values. All the dependent works gathered around Buu Duc Temple such as Left and Right Temple (in the front), Left and Right Houses (in the back), increase the nobility of the main temple.

Thieu Tris tomb, with its simple and intimate beauty, leans against the foot of Thuan Dao Mount. In front of the tomb stretches a flat land with green trees and rice-fields ranging from the Perfume River's bank up to Lim Bridge.