Tomb of Tu Duc is one of the most beautiful works of royal architecture of the Nguyen dynasty. The tomb lies in a boundless pine forest, 8km from Hue city-centre. 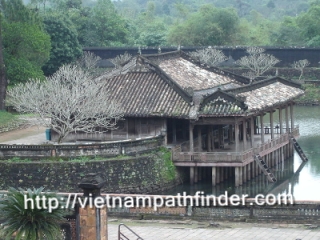 Characteristic: It is one of the most beautiful works of royal architecture of the Nguyen dynasty. The tomb lies in a boundless pine forest, 8km from Hue city-centre. Its construction started in December 1864 and finished in 1867. On an area of about 12ha wide, nearly 50 constructions were built on terraces of various levels (about 10m difference). All constructions include the word Khiem (Modesty) in their names.

The tomb is divided into two main parts: 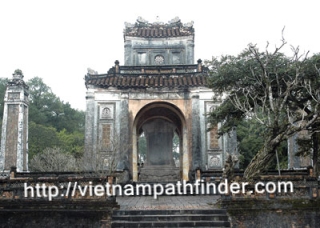 Entering Vu Khiem entrance, there is Luu Khiem Lake. On the lake are Xung Khiem Pavilion and Du Khiem Pavilion where the Emperor used to come to admire flowers, compose poems, read books, etc. Then, three Thanh stone steps to Khiem Cung Gate lead to Hoa Khiem Palace, which used to be the Emperors working place, and is now the altar devoted to the Emperor and the Queen. On both sides are Phap Khiem House and Le Khiem House for the military and civil mandarins. 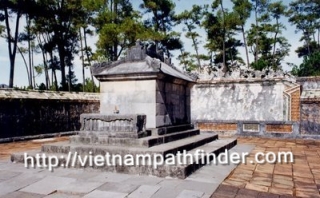 On the left of the temple is the necropolis itself slopping upward with the Honour Courtyard, the Stele Pavilion, and the sepulture. Right behind Bai Dinh (Honour Courtyard), with two rows of magnificent military and civil mandarins, is Bi Dinh (Stele Pavilion) with the biggest stone stele in Vietnam. It is inscribed with Khiem Cung narrative, composed by the Emperor himself, writing about his life and imperial cause as well as his misadventures and diseases, etc. On the hill, opposite the semi-circular Tieu Khiem Tri Lake is the Buu Thanh brick wall, in the middle is a stone house, where the Emperor was buried.

Tu Duc's tomb is not only one of the most beautiful works of the Nguyen Dynasty, but it is also romantic scenery of mounts and lakes.