Hue Temple of Literature is a worship temple founded by the Nguyen Dynasty to dedicate to celebrated scholars of Confucianism. 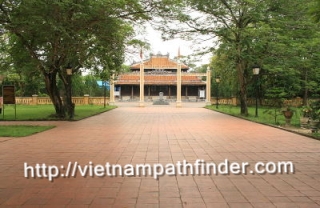 Characteristic: The Temple of Literature is a worship temple founded by the Nguyen Dynasty to dedicate to celebrated scholars of Confucianism. In 1808, Gia Long and his Imperial Court decided to choose a low hill beyond the Thien Mu Pagoda, on the left bank of the Perfume River, i.e. the current position, to built a new imposing and striking Temple of Literature. The construction of the Temple of Literature was commenced on April 17th, 1808 and finished on November 12th, 1808. 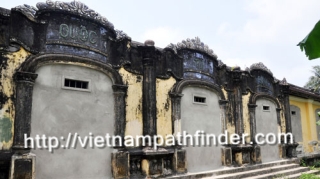 The Temple of Literature faces south. All main constructive works were built on the top of the hill, three meters higher than the surrounding land. In front of it was the Perfume River, in the back was villages, hills and mounts spreading from Truong Son Range. All items of Hue Temple of Literature were erected on a square surface of 160m long on each side enclosed by La Thanh (surrounding wall). There was once a complex of 50 big and small constructions including 32 steles which bore names of doctors and four other steles.

The Temple of Literature was many times renovated and many sub - constructions were built, especially in Minh Mang and Thieu Tris time. From Minh Mangs time onwards, National Examinations were held so that steles bearing the names of successful candidates were erected here. These "Tien si de danh bia" - "Steles bearing doctors names" were gradually erected on the yard of the main temple from 1831 to 1919, the year in which the last National Examinations was held in Khai Dinhs time. 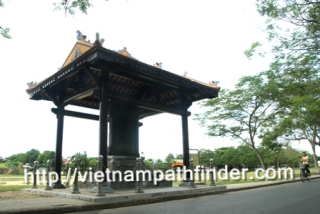 As destroyed by the war and weather, the remains of the Temple of Literature are now the 34 steles of great cultural and historic value. On these steles are names, ages and places of birth of 239 successful candidates in National Examinations organized in the Nguyen Dynasty.

Hue Temple of Literature is valuable historic remains. To visit it, tourists can understand more about the tradition of knowledge appreciation, scholars? administration and study encouragement of our ancestors from the old time.