An Hien Garden House is closely connected with the name, age, life and cause of an active nationalist who had a great contribution to Hue City. 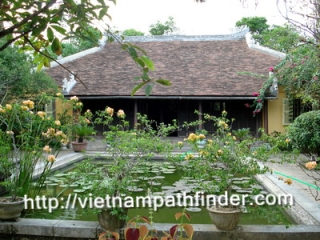 Characteristic: An Hien Garden has been described as a fine, sharp, and unique work by many writers. In the garden, many kinds of flowers grow. There are popular kinds of flowers such as jasmine, pergularia, pomegranate, sunflower, climbing rose and indigenous roses. This was originally the residence of the 18th daughter of Duc Duc Emperor. After 1895, it was transferred to Mr. Pham Dang Thap, a son of a high-ranking mandarin under Gia Long reign. In 1920, this house was transferred to Mr. Tung Le. The last owner of this house was Mr. Nguyen Dinh Chi, a province chief. He moved into the residence in 1938. When he died, his wife, Mrs. Dao Thi Yen continued to live in this house. She was the person who led the school boycott of Dong Khanh students against the French colonialism in 1927. She then became the Principal of Dong Khanh High School, member of the sixth and seventh National Assembly, and a commissioner of Vietnam Fatherland Front Committee. Accordingly, An Hien Garden House is closely connected with the name, age, life and cause of an active nationalist who had a great contribution to Hue City.

The gate of the house has an ancient arch design. The gate roof is decorated with a tiger-face figure and stylized designs on both sides. In the middle of the gate, from the outside, under the roof is a book-shaped panel embossed in the wall. A brick board of two Chinese characters meaning An Hien is inlaid with pieces of green and white terracotta in the black background. Above the panel, there are symmetrically two bats spreading their wings and looking down the gate. Right under the book-shaped panel is a colorfully and elegantly tiger-faced figure in a semicircular shape. 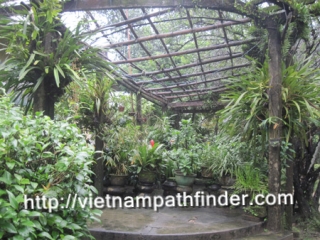 Aristocratic flowers consist of all kinds of orchids and land orchids. Besides the modern roses imported from the European GauJard and Meilland companies, visitors can find wild tomentose roses. Particularly, the garden has a big camellia presented by a Japanese Flower Association. In addition to the flower abundance, the garden also has many precious fruit-trees yielding year-around sweet fruits, namely mangosteen, durian, Thieu litchi, especially Tien Dien persimmon which are brought from Nghi Xuan district, Ha Tinh Province by a great-grandchild of the great poet Nguyen Du as a present for the family of Nguyen Dinh Chi. This is a precious and rare kind of persimmon; it bears very delicious seedless fruits every July.

An Hien Garden House is a special cultural characteristic contributing to the beauty of Hue. Entering the garden, visitors will have a feeling of living in a miniature universe, in a peaceful and charming world. It has an attraction which is always secret as an unfinished book.