According to myth, the city of Vientiane was created by the Naga Souvannanak. Vientiane was an ancient city whose territories covered both banks of the Mekong River. The first name of Vientiane was “Ban Nong Khanthae Phiseuanam” village, which later became “Vientiane” town under the leadership of the first Governor, Bourichan or Phraya Chanthabouly Pasitthisak, between 430-120 B.C.

In 1357 King Fa Ngoum held a grandiose celebration for the great victory of the unification of all Lao territories enhancing his prestige and power over the nobility throughout the Lane Xang Kingdom and the neighboring kingdoms. It was organized in the Pak Pasak area in present day Vientiane.

During the reign of King Souliyavongsa Thamikarat in the 17th century, Vientiane grew to become one of the most developed civilizations. The city was the center of administration for politics, socio-economics and culture. The kings were brave, clever and kind and people were happy. The palaces were very beautiful, looking like golden houses standing along the bank of the Mekong River.

However, Vientiane was burnt down by Siames troops in 1828, and divided into two cities. The city on the right side of the Mekong River became part of Siam and the city on the left side remained part of Laos. At present, Vientiane is a smaller city, only half of its former size.

In the years of 2009 and 2010; two great historical events take place in Vientiane. In 2009 we hosted the 25th annual SEA Games and in 2010 we held a celebration of the 450th anniversary of the foundation of Vientiane as the Capital (1560-2010). To prepared for the above auspicious events Vientiane people have continued developing the city to be peaceful, clean, green, charming, light and civilized. 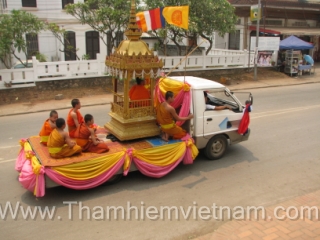 Vieng (Vien) in the Lao language means “the city”.

Chantha (tiane) a Pali word, means sandalwood or the moon. Vientiane is the city of sandalwood and sandalwood is the symbol of Vientiane. It could also be the city of the moon, or the city where people respect the moon as their symbol. It is true however, that Lao people believe their origin to be from the moon, and even the design of the national flag has the image of the moon in its center.

In the old part of Vientiane city, an attractive and interesting settlement is situated along the Mekong River where the ancient temples, museums, monuments and parks are all located just a short distance apart.

The cosmopolitan capital of Laos, Vientiane, has galleries, boutiques, theatres, nightclubs and internet cafe, making it a major attraction for visitors from all around the globe. Although the city is small, it offers visitors a great variety of restaurant serving both Lao and foreign cuisine.