Wat Xieng Thong is the temple highlight of Luang Prabang. It was built by King Saisetthathirat in 1560 and is located on a peninsula, in between the Mekong and Khan rivers. 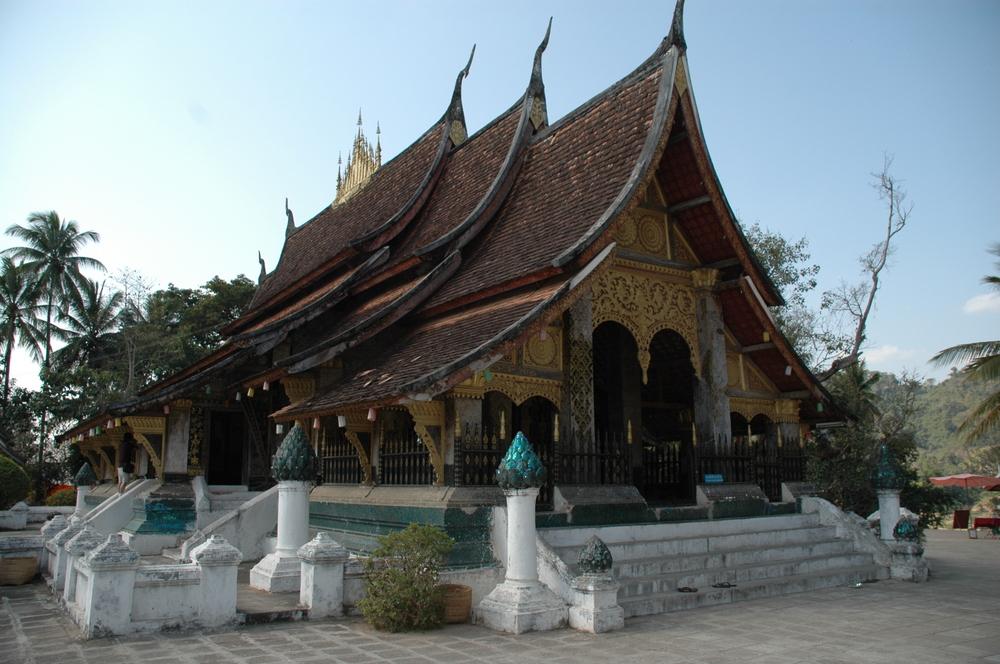 At the 'tip' of town, where the Khan flows into the Mekong, is one of the city's oldest and most important temples, Wat Xieng Thong ('Golden Tree'). The temple's sim (ordination hall) was built in 1560. The temple was spared destruction by the Black Flag Haw invasion of the late nineteenth century and so is one of the few temples that has been in continuous use since its founding.

The sim's sweeping roofs are considered the definition of the Luang Prabang style of architecture. The front gable ends are richly decorated with intricate gold designs on red ochre background. The columns are a rich lacquer-like black with gold stenciling.

Inside is rather dark and atmospheric. The walls and columns are also black with gold stencil, and the beams are red ochre with more gold stencils. A large Buddha images miles benevolently down on all visitors.

The outside of the back wall of the sim is decorated with brightly colored mirrored tiles in a mosaic representing the golden tree of life, after which the temple is named.

Next to the sim is a small wiharn housing a one-of-a-kind reclining Buddha image. The statue dates from the temple's founding, and is much revered by locals. The walls are inlaid with many small gilded amulets, and the ceiling is also stenciled in gold on black.

Behind the sim are many chedis, as well as a small library also decorated with a beautifu mirrored tile mosaic.

In the compound opposite the sim is a large ornate building housing the funeral chariot built for King Sisavong Vang in 1960. The carriage takes up almost the entire interior with its throne-like gilt frame. Placed on the carriage are duplicates of the caskets used to hold the late king, queen and king's brother. The walls of this building are also decorated with colored mirrored tiles. Various paraphernalia is scattered around the room, and at the back are several standing Buddha images seemingly 'standing guard' over the royal family.