The ancient Khmer religious complex of Wat Phu is one of the highlights of any trip to Laos. Stretching 1400 m up to the lower slopes of the Phu Pasak range (also known more colloquially as Phu Khuai or Mt Penis). 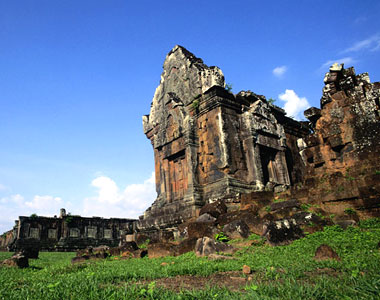 Wat Phu is small compared with the monumental Angkor-era sites near Siem Reap in Cambodia. But the tumbledown pavilions, ornate Shiva-lingam sanctuary, enigmatic crocodile stone and tall trees that shroud much of the site in soothing shade give Wat Phu an almost mystical atmosphere. These, and a site layout that is unique in Khmer architecture, led to Unesco declaring the Wat Phu complex a World Heritage Site in 2001.

Sanskrit inscriptions and Chinese sources confirm the site has been worshiped since the mid 5th century. The temple complex was designed as a worldly imitation of heaven and fitted into a larger plan that evolved to include a network of roads, cities, settlement and other temples. What you see today is the product of centuries of building, rebuilding, alteration and addition, with the most recent structures dating from the late Angkorian period.

At its height the temple and nearby city formed the most important economic and political center in the region. But despite its historic importance, the 84 ha site remains in considerable danger from the elements. Detailed studies reveal that water erosion is pressuring the site and without a systematic water management plan the buildings will eventually collapse. Italian and Japanese funded the projects have helped stabilize the southern of two ancient canals built to channel water away from the central structures. However, the equally important northern side of the site. To see it, compare the relatively intact terraced steps and pavilions on the south of the site with those on the north, With about 1 million needed to repaired the northern canal and terrace, Wat Phu’s future is by no means secure.

But it’s not all doom and gloom. Years of work by the Italian Archaeological Mission and the inimitable Dr Patrizia Zolese, the leading expert on Wat Phu who has been working at the site since 1990, have resulted in the first detailed map on the site and surrounding 400 sq km, revealing much about way the ancients lived. During the last two years the local and falang archaeologists have restored the ceremonial causeway, replacing slabs and re-erecting stone makers that had been scattered across the site. Restoration of the Nandi Hall is underway and is expected to be finished in 2009.

Don’t miss the museum ( 8am – 4.30 pm) beside the ticket office. Extensive cataloging work has recently been completed on the dozens of lintels, nagas (mythical water serpents), Buddhas and other stone work from Wat Phu and it associated sites. Descriptions are in English.