Ta Prohm - Cambodian located approximately one kilometre east of Angkor Thom and on the southern edge of the East Baray, it was founded by the Khmer King Jayavarman VII as a Mahayana Buddhist monastery and university. 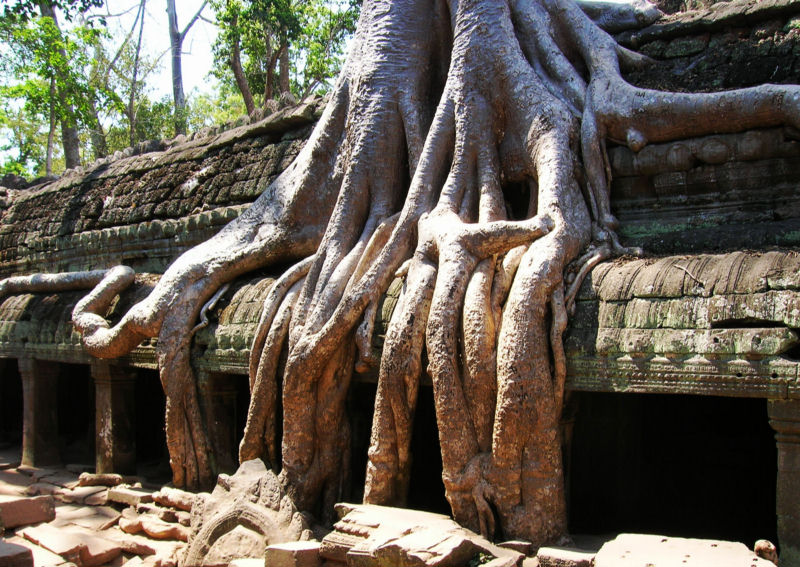 This photo, taken by a colleague on his recent travels through Cambodia, represents environmental history at its most palpable: it shows the perpetual tension between nature and human society – this being a rare occasion where nature has demonstrably won the battle.This temple was part of a wealthy and thriving complex in the region of Angkor, the base of the Khmer Empire, which flourished from approximately the 9th to 15th centuries. Ta Prohm temple (completed around 1186 A.D.) was one of the first temples built as part of a massive programme of construction and public works undertaken by King Jayavarman VII after he ascended the throne in 1181 A.D. It is estimated that the temple complex was home to more than 12,500 people (including 18 high priests and 615 dancers), with an additional 80,000 people living in the surrounding villages which provided services and supplies.

After the fall of the Khmer empire in the 15th century, the temple of Ta Prohm was abandoned and neglected for centuries. When the effort to conserve and restore the temples of Angkor began in the early 20th century, it was decided that Ta Prohm should be left largely as it had been found as a “concession to the general taste for the picturesque.” Ironically, perhaps, while work has been done to preserve the ruins, this has been focused largely on maintaining “the condition of apparent neglect”, including work to prop up the trees which are slowly consuming the ruins. This decision to maintain the temple in a ruined condition proved an inspired choice, at least from the perspective of popular culture: the temple was used as a location in the 2001 Hollywood blockbuster Tomb Raider, starring Angelina Jolie [see poster right].

For Cambodia package tours, please to contact us to get more information details at info@vietnampathfinder.com