The Prasat Kravan - Cambodia is a brick structure reknowned for its remarkable brick sculptures, a unique and very different style from the other temples at Angkor. 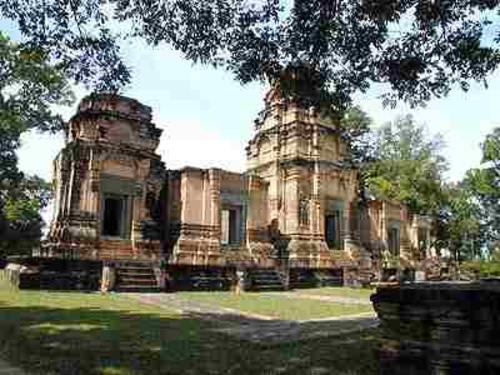 e name Prasat Kravan is a modern name. It means cardamon sanctuary, and refers to a cardamon tree that stood there. It was built by high officials during the short reigns of Harshavarman I or Isanavarman II. It was one of two such temples - the other is located south of Phnom Penh, and is called Prasat Neang Khmau. Both Prasat Kravan and Prasat Neang Khmau are dedicated to Vishnu.

Prasat Kravan consists of five sanctuary towers or prasats arranged in one row, from north to south. They face east, as do most Angkor temples, and all stand on the same platform. In front of the five prasats is a terrace with the base of what used to be the gopura.

Today only the central and the southernmost prasats have still a superstructure, which consists of receding tiers, each step smaller than the before. The towers were restored in the 1960s, and today Prasat Kravan appears clean and meticulously upkept. During the restoration process, it was natural that the restorers had to introduce bricks to the temple that are not part of the original. These bricks have the marking CA on them, representing Conservation Angkor.

No mortar was used in the construction of Prasat Kravan. Instead the Khmer technique of that period called for the use of a unique vegetable gum to hold the bricks together. There are two things to look for and admire when you explore this temple. 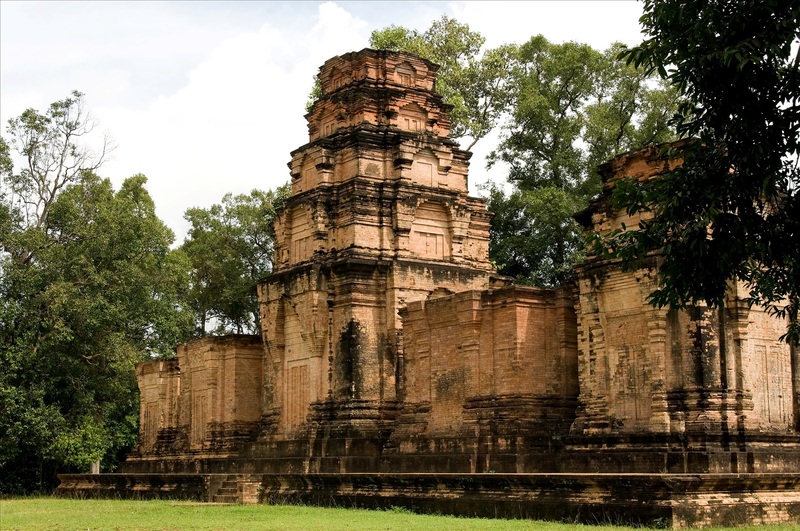 First of all, look at the lintels and the octagonal colonettes at the front entrance of all the five sanctuaries. while the sanctuaries themselves are of bricks, the lintels and colonettes are of sandstone, and they stand out as being of a different colour. The best preserved lintel is on the southernmost sanctuary. It shows Vishnu on a garuda, and the garuda is clutching the head of a naga.

Only two of the five prasats have interior carvings. These are the northern and central prasats. The motif on all three walls of the central prasat is Vishnu. The left wall shows Vishnu in the guise of a dwarf, or Vamana avatara, stepping over the ocean, which is represented by the wavy lines below him. In his four arms are the four attributes: discus, lotus, mace and conch shell. On the wall directly in front is another Vishnu carving, this one having eight hands, with six rows of attendants, with images of reptiles under him. The Vishnu on the right wall is shown riding the garuda.

The northernmost prasat also has its three walls carved. Here we see Lakshmi, Vishnu's consort. The wall on the left shows a four-armed Lakshmi holding her attributes. Attendants knelt before the deity.