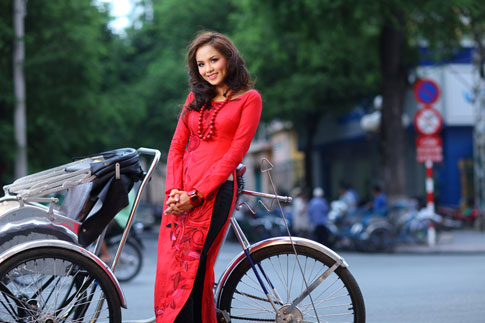 The long gown worn with trousers by Vietnamese women, has become the symbol of the Vietnamese feminine beauty, and the pride of the Vietnamese people.  This national pride culminated in 1995 when Miss International Pageant in Tokyo gave its Best National Costume award to the Vietnamese representative Truong Quynh Mai.  Even before such international recognition, the Ao Dai had long been the source of inspiration of artists and poets, and thus had become an institution in Vietnamese arts and literature.

The Ao Dai was born as the costume required to be worn by the southern courtiers under the reign of the southern lord Nguyen Phuc Khoat.  Eager to establish a separate identity from his northern rivals, the Trinh lords, who enjoyed the status of regents to the puppet kings of the declining Le dynasty, Lord Nguyen decreed that men and women of his court wore trousers covered by a long gown.  Thus was born the Ao Dai.  The garment borrowed the style of clothing worn by the Cham, the original inhabitants of the land to the south of the dividing Gianh river, whose country of Champa (now Central Vietnam) had been invaded and conquered by the Vietnamese.  The Ao Dai was Lord Nguyen’s way to show his respect of the culture of the Cham and to win over their support.

Although many Vietnamese identify the Ao Dai as a variation of the Ao Tu Than (four-panel tunic), the two have separate and distinct origins.  The Ao Tu Than is generally worn by peasant women in the North.  It consists of four panels, two in the back and two in front.  The back panels are sewn together while the front panels are left open or tied by a belt.  Inside the Ao Tu Than, the woman wore a bodice (known as “Yem”) to cover the chest and a long skirt (known as “Vay”) to cover the legs.  The fabric of the Ao Tu Than was weaved in small width, necessitating the four-panel structure.

The original Ao Dai was by no means the symbol of aesthetics.  The garment was plain and loosely fitted, unflattering to the female body.  It was not until 1930 when a group of French-trained artists, beginning with the
Hanoian Cat Tuong (also known as Le Mur, the French translation of a homonym of the artist’s first name), combined the design of the Ao Ngu Than (five-panel gown), a variation of the Ao Dai with features borrowed from the Ao Tu Than, and French fashion dresses, that the Ao Dai morphed from plainness to beauty and sensuality.  The image of the last empress of Vietnam, Hoang Hau Nam Phuong, wearing the Ao Dai with exceptional elegance, has left a great impression on artists. Painters and sculptors began to model their subjects in Ao Dai, and artworks depicting historical female personages, including the Virgin Mary, became increasingly popular.

The Ao Dai stepped onto the political stage when Tran Le Xuan, wife of Ngo Dinh Nhu, Chief Political Adviser of Ngo Dinh Diem, President of South Vietnam’s First Republic, donned its first décolleté version to promote her New Woman Movement.  Nguyen Thi Binh, negotiator for the Vietcong at the Paris Peace Conference, wore the Ao Dai to demonstrate her patriotism.  Ironically, the Communist government of Vietnam had banned the Ao Dai as a symbol of “capitalist decadence.”  It was not until the late 1980’s that the Ao Dai regained its stature which culminated with Truong Quynh Mai.

Today, the Ao Dai has become the Vietnamese woman’s choice of fashion for special occasions.  Fashion designers such as Thiet Lap of the 60s and Sy Hoang of today have continued to conceive new designs.  The introduction of the raglan sleeve (sleeve that continues to the neck), the raising of the opening of the panels to a higher level exposing the skin on both sides of the waist, and other features borrowed from Western fashion add sexiness and sensuality to the Ao Dai.  Yet the garment moves delicately with the body giving the wearer an appearance of modesty combined with self-confidence.

And so the Ao Dai becomes a cause for celebration.  In Vietnam as well as among the Vietnamese emigrant communities around the globe, the Ao Dai Beauty Pageant has become a staple in the Vietnamese entertainment industry.  Many well-known Vietnamese fashion designers devote their entire careers to develop new looks for the Ao Dai.

The history of the Ao dai reflects the adaptability of the Vietnamese.  As people who constantly had to defend themselves against foreigners, they adopted products of foreign cultures which they valued and transformed them into their own.  Thus, the women’s Ao Dai is a cultural metamorphosis that is typically Vietnamese:  a design adopted from the Cham that combines with Western elements of fashion and aesthetics to become a product that is uniquely Vietnamese.