Giac Vien Pagoda has been classified by the State as a cultural relic and a mini-museum of wooden engravings of historical and artistic value.

Location: Giac Vien Pagoda is located on Lac Long Quan Street, District 11, Ho Chi Minh City.
Characteristic: It has the ancient architecture of the pagodas built in the Nguyen Dynasty of the 19th century, and typical characteristics of the southern area in terms of the architecture, design and arrangement of the worshipping shrines.
In 1798, a monk who was in charge of taking care of the restoration of Giac Lam Pagoda, built a small pavilion for his daily prayers, called Quan Am Cac (Kwan Yin Pavilion). In the third year under king Tu Ducs reign (1850), the pavilion was rebuilt and named Giac Vien Pagoda. When building Dam Sen Tourist Park, the Management Board decided to preserve Giac Vien Pagoda intact and incorporate it into the park, making the park more attractive due to its cultural-historical value. 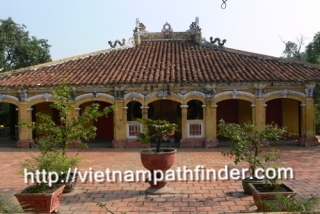 Giac Vien Pagoda has typical features, of southern Vietnam. The main shrine, also a big hall, is 360m in area, and used to worship Buddha. To its east and west, there are corridors, a room for the monks to prepare clothing before assisting the Superior Monk, and a large and spacious compartment at the rear. Along the corridors, there are small altars with worshipping items. In particular, there are rows of wooden pillars engraved with parallel sentences. The letters are carved delicately and painted with red lacquer and trimmed with gold. Around them there are decorative designs of leaves and climbing plants. All 153 statues in the pagoda are made of jack wood. The faces and postures of the statues look honest and they are placed low, creating a close feeling between them and the viewers.

The most attractive items are 60 plates, which are engraved on both sides made of jack wood. They are made with gold. The most beautiful plate is engraved with 18 fat, honest and smiling Arhats, with each riding on the back of a buffalo, a cow, a pig, a goat... Some plates are engraved with birds, ducks, fish ... but all looking alive. Other plates are carved with fruits popular in the South, such as coconut, mangos teen, durian, rambutan These wooden engravings are the only ones that have been kept intact in Vietnam. 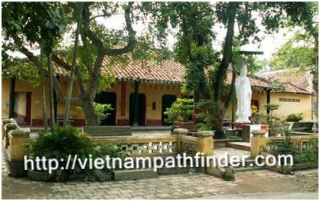 The Buddhist spirit of the ancient Viet people, during their migration south, accepted different religious tendencies and sects, on condition that they were useful to society. This is clearly seen through the items preserved at Giac Vien Pagoda. For this reason, Giac Vien Pagoda became a centre for worshipping ceremonies and discussions on Buddhism of the six southern provinces in the 19th century- a prosperous time for buddhist followers and talents whose works remain valuable until today.

Giac Vien Pagoda has been classified by the State as a cultural relic and a mini-museum of wooden engravings of historical and artistic value. For this reason, it attracts a lot of researchers and visitors all year round.