The traditional surrounding flower villages have been turning into villages within the city. 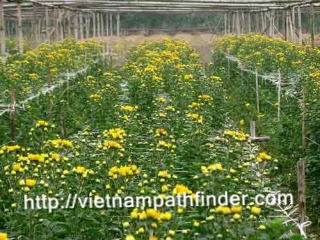 The area of Tay Ho, Quang Ba, Ngoc Ha, Huu Tiep, Dai Yen were the flower-growing land. Overtime, Hanoi has come into its times of modernization and industrialization. The traditional surrounding flower villages have been turning into "villages within the city". Referring to the traditional flower villages in Hanoi, people speak the most of Ngoc Ha. It had become a flower village since the establishment of capital city. This village has developed continuously by the experience of history and time, and has always been considered as a big flower village supplying fresh flowers for Thang Long - Hanoi City and its vicinity. In 1954, there were in this village up to 500 households involved in planting flowers. Every morning, from the early time, the Ngoc Ha flower market was full of buyers and sellers, even coming from Vong Village (Dich Vong - Cau Giay District) with their tuberoses.

Due to the expansion of city and fast growth of population, the traditional flower villages like Ngoc Ha, Huu Tiep... are getting limited, the flowers-growing area remains only in small gardens between the buildings. Meanwhile, many new flower villages around the capital have been gradually set up and developing, such as Tay Tuu (Tu Liem District), Vinh Tuy (Thanh Tri District), Dong Anh township and Phu Thuong (Tay Ho District). The flower-growing area increases fast from 92ha in 1990 to over 500ha in 1999; specifically, increased by 22 times in Tu Liem District, 1.5 times in Thanh Tri District and 33 times in Dong Anh District. Among the rural districts, Tu Liem gets the highest income from flower planting compared to the other places in Hanoi (VND141 million per hectare in 1997).

Dam Village is the old name of Tay Tuu Commune (Tu Liem District); it is located 15km from the Hanoi center to the west. The village changed from rice cultivation into flower production since 1994. Presently, the flower-growing area of Dam Village comprises up to 100ha, accounting for 35 percent of its total sown area; and there are more than 1,000 households of the village, i.e. accounting for 40 percent of the total, are engaged in planting flowers. The local flower planters remember that they faced not-small difficulties when they started to change from rice into flowers, especially in terms of seeds. Beside the varieties of seasonal flowers, so familiar to the population of Hanoi like rose, yellow and white chrysanthemums, peony, violet ... they have tried to import many kinds of stranger flowers, such as queen, prince and princess chrysanthemums, marigold, Dalat rose, French rose,... 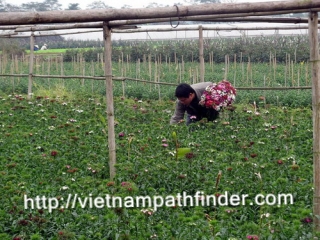 If there are more varieties of chrysanthemums in Dam Village, then there is a larger area devoted to growing roses in Vinh Tuy. The Vinh Tuy Village has an area of 100 mau (1 mau = 3,600m) reserved for planting flowers, of which up to 55 mau for roses. Roses are grown everywhere, in gardens and on fields. For this purpose, each household has at least tens square meters or a whole plot. In the recent time, the local rose planters have mainly worked with varieties of Dalat roses; but now there are more than tens of new varieties coming with tourists to Vietnam.

The quality of flowers grown in villages around Hanoi is getting higher. A short time ago, flowers sold in Hanoi shops were mainly provided from Dalat and foreign countries; but now the shopkeepers also try to take flowers right in Hanoi.

It is clear that the demand on fresh flowers in Hanoi is more and more high. It is just the setting-up and development of new flower villages surrounding the city that helps meet partly this demand. However, the planters have to try to create new varieties of nice and unique flowers along with the familiar varieties like chrysanthemums and roses.