Halong Bay is located in the northeastern part of Vietnam and constitutes part of the western bank of Bac Bo Gulf, including the sea area of Halong City, Cam Pha Town and part of Van Don island district, Quang Ninh Province. UNESCO recognized it as the World Natural Heritage two times.

This video is filmed 2days 1night sleep on deluxe boat with Vietnam pathfinder travel
We also provide with private chater boats for family cruise vacations, honeymoon couple, wedding party from any 2days up a week in Halong bay

Ha Long Bay is a center of a larger zone which includes Bái Tử Long bay to the northeast, and Cát Bà islands to the southwest. These larger zones share similar geological, geographical, geomorphological, climate and cultural characters. Ha Long Bay has an area of around 1,553 km², including 1,960 islets, most of which are limestone. The core of the bay has an area of 334 km² with a high density of 775 islets. The limestone in this bay has gone through 500 million years of formation in different conditions and environments. The evolution of the karst in this bay has taken 20 million years under the impact of the tropical wet climate. The diversity of the enivironment, climate, geology, geography, and geomorphology in the area have created biodiversity, including tropical evergreen biosystem, oceanic and sea shore biosystem. Ha Long Bay is home to 14 endemic floral species and 60 endemic faunal species.

Historical research surveys have shown the presence of prehistorical human beings in this area ten of thousands years ago. The successive ancient cultures are the Soi Nhụ Culture around 18,000-7,000 BC, the Cái Bèo Culture 7,000-5,000 BC[6] and the Hạ Long Culture 3,500-5,000 years ago. Ha Long Bay also marked important events in the history of Vietnam with many artifacts found in Bài Thơ Mout, Đầu Gỗ Cave, Bãi Cháy.

Nowadays, Ha Long Bay is one of the most popular travel destinations in Vietnam.
500 years ago, Nguyen Trai praised the beauty of Ha Long Bay in his verse Lộ nhập Vân Đồn, in which he called it "rock wonder in the sky". In 1962 the Ministry of Culture, Sports and Tourism of Vietnam listed Ha Long Bay in the National Relics and Landscapes. In 1994 the core zone of Ha Long Bay was listed by UNESCO in its World Heritage Sites according to criteria vii and listed for a second time according to criteria viii. Together with Nha Trang Bay and Lang Co of Việt Nam, Hạ Long Bay is recognized as one of the 33 most beautiful bays of the world. 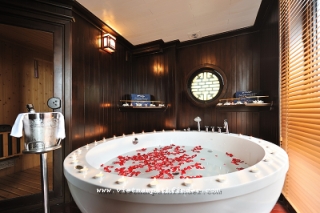 With all luxury as floating hotel for your luxury life

All bes seafood for 2days cruise Halong bay with us

Morning Taichi and relaxing with a Vietnamese coffee