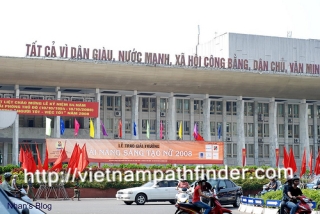 The front building is the performance house, equipped with a rotary stage, and two halls (the big hall has a seating capacity of 1256, the small one 375). Behind this block is the study house with a library and rooms for clubs to hold workshops and conferences. The science and technology house connects the two buildings together. The Friendship Cultural Palace is where cultural activities, art performances, fashion shows, beauty contests, conferences, workshops, exhibitions, and sports events are usually held.