Hanoi Opera House is an old theatre with French architecture and typical Gothic and Mosaic characters reflected on the door domes and the glassed room respectively. 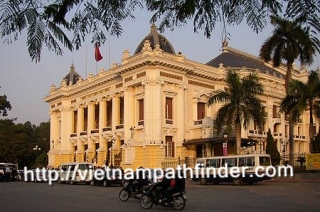 Location: The Hanoi Opera House is situated on Le Thanh Tong St., Hanoi; near the Red River and several hundreds meters east of Hoan Kiem Lake.
Characteristics: It is an old theatre with French architecture and typical Gothic and Mosaic characters reflected on the door domes and the glassed room respectively.
For a long time, the Hanoi Opera House has been a rendezvous for those who love theatrical performance and traditional songs and music, symphonies, opera and classical opera. It is also a tourist attraction for local and foreign visitors.

The Hanoi Opera House is renowned for its unique architecture and good composition. It is furnished rationally and harmoniously. Since its establishment, the Hanoi Opera House is the largest theatre in Vietnam. Its construction started in 1901 and completed in 1911. Previously the site was a big pond, adjacent to the city gate of Tay Long (also called Tay Luong) of the ancient Thang Long Capital. The construction met with many difficulties, because the foundations of the theatre were built on the pond. Before building a concrete foundation, nearly one metre thick, the pond was emptied and dredged, then 30,000 hard bamboo stakes were placed on its bed. 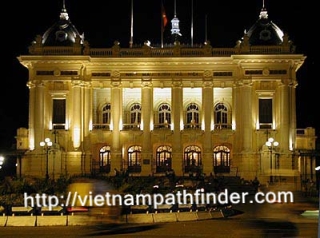 After nearly 100 years of operation, the theatres equipment and adornments became old and run down. In 1997, the theatre was repaired and modernized under the management of two Vietnamese French architects, Ho Thieu Tri and Hoang Phuc Sinh. The original architecture of the 3-storey theatre has remained. The decorative designs on the ceiling, arches, walls, and doors were renewed. The 3-metre-high stage and the audiences hall, with 600 seats, were also modernized in conformity with international standards. The theatre has been equipped with state-of-art facilities and appliances, compatible for all types of artistic performances, from folk music and songs, ballets and piano to classical opera, reformed opera, Vietnamese operetta and drama, all made great impressions on the audience. The Hanoi Opera House has also successfully organised many large-scale international concerts.

The Hanoi Opera House is a worthy artistic centre and a cultural and architectural relic of the capital Hanoi.