Location: Hoan Kiem Lake is located in the center of Hanoi.
Characteristic: Hoan Kiem Lake also called Lake of the Restored Sword. The name Lake of the Restored Sword is derived from a legend.
After ten years of hard fighting (1418 - 1428), the Lam Son insurrectionists led by Le Loi swept the foreign invaders out of the country of Dai Viet (Great Viet), ending the Mings 20-year domination over the Viet people. Le Loi became a national hero, proclaiming himself kings, called Le Thai To and establishing his capital in Thang Long.

On a beautiful afternoon, the king and his entourage took a dragon-shaped boat for sight-seeing on Luc Thuy (Green Water) Lake, which was located in the centre of Thang Long Capital (present-day Hanoi). As the boat was gliding on the lake, suddenly there was a great wave and on top of the wave, the Golden Tortoise Genie appeared, telling the king: "Your Majesty, the great work is completed. Would you please return the sacred sword to the King of the Sea?".

The precious sword was formerly lent to Le Loi by the King of the Sea and was always beside him throughout his battles and helped him win over the Ming invaders. At the time the Tortoise Genie spoke, the sword hung at the Kings waist. It then moved out of the scabbard and flew towards the Genie. The Genie kept the sword in his mouth and dived under the water and bright lightning flashed up to the sky. Since then, Luc Thuy Lake has been called the Restored Sword Lake or the Sword Lake for short.

The Sword Lake is not only a historical site but also a beauty-spot of the capital. When visiting Hanoi, Ludemis, a Greek poet, exclaimed: The Sword Lake - An emerald jewel set in the heart of the city, With the Red River as a silk ribbon around. 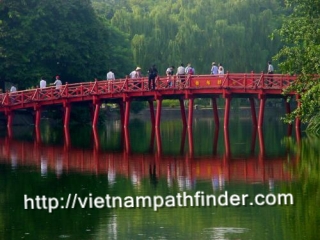 It is said that when visiting Hanoi, if the visitor does not see the Sword Lake, then they would not have actually been in Hanoi. The lake is an endless topic and inspiration for painters, poets, writers, music composers, etc, and innumerable works about the lake have been produced.

The Sword Lake is really an emerald jewel of Hanoi. For generations, the Vietnamese believed that deep in the green water of the Sword Lake, there is a sacred sword of their ancestors, which is carefully safeguarded by the golden tortoise. When the weather changes, the tortoise emerges on the water surface to take a sun bath, seeming to prove his existence and remind the young generation of their national history of defending their country from foreign invaders.