Hanoi Flag Tower, also called Cot Co, is one of the rare architectural works in Hanoi that was fortunate enough to not be destroyed by the French administration between 1894 and 1897.

Location: Flag Tower is on Dien Bien Phu Street, Ba Dinh District, Hanoi; near Ba Dinh Square.
Characteristic: Hanoi Flag Tower, also called Cot Co, is one of the rare architectural works in Hanoi that was fortunate enough to not be destroyed by the French administration between 1894 and 1897.
It was used by French troops as an observation tower and communication station between command headquarters and adjacent military posts. 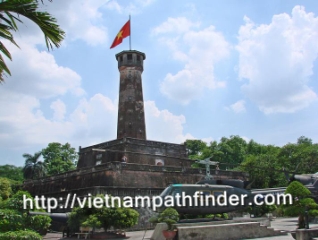 The part above the third tier is a column with 8 fringes narrower to the top. Each fringe is 2.13m wide and 18.2m high. The spiral staircase consists of 54 steps. It is lightened and ventilated by 39 flower-shaped and 6 fan-shaped windows which scatter along the fringes with 5 or 6 on each.

On top of the tower is an octagonal observatory of 3.3m high with 8 doors in 8 sides. In the middle of it, there is a round base of 0.4 meter in diameter and 8m high up to the top where the national flag is fixed. The whole architecture is 33.4m high from its basement up to the top including three tiers of 12m, column of 18.2m and observatory of 3.3m. If including the round base for flagging on top, the structure is 41.4m high.

It was built in 1812 and is composed of three platforms and a tower. The words Nghenh Huc, meaning "to welcome dawns sunlight," are inscribed on the eastern door. The western door bears the two words Hoi Quang, meaning "to reflect light," and the southern door, Huong Minh, meaning "directed to the sunlight."

The tower receives sunlight through 36 flower-shaped and six fan-shaped windows.