We accept payment via:

We are car rental company and office is based in Hue and provide private 7 seats car for visiting the former DMZ at Quang Tri, central parts of Vietnam (some 700 km from Hanoi capital city). the DMZ Vietnam is a special site for Vietnam Veterans Tours for both Vietnamese veterans or American Veterans.

Km from Hue city to the DMZ Quang Tri is some 100 km and  driving time around 2-3 hours/ one way and whole sightseeing day around 7 -8 hours.

+ We provide also with local English, French speaking guides for DMZ that will make your former battle be more exciting.( Surcharge upon request)

DMZ- Quang Tri- Vietnam
Demilitarised Zone (DMZ) Vietnam is popular for fans of military history as it is possible to see hundreds of weapons, artillery and military tanks left behind by foreign troops. Located 100km north of Hue, the iconic war zone is set along Ben Hai River, encompassing five kilometres of land on either side of the border.

An evocative memorial to the legions of North Vietnamese soldiers who died along the Ho Chi Minh Trail, this cemetery is a sobering sight. More than 10,000 graves dot these hillsides, each marked by a simple white tombstone headed by the inscription liet si (martyr). Many graves lie empty, simply bearing names, representing a fraction of Vietnam’s 300,000 soldiers missing in action. It’s 27km northwest of Dong Ha; the turn-off from Hwy 1 is close to Doc Mieu.

Hien Luong Bridge
Between 1954 and 1975, Demilitarised Zone (DMZ) Vietnam served as a war-free buffer between the North and the South but it’s also the site of some of the worst battles in Vietnam’s history. Today, visitors can still visit the many destroyed foundations of former American military bases buildings, monuments dedicated to local war heroes, and hundreds of war relics displayed within a US combat base-turned-museum.

General Huy who was the commander of North Vietnam army during the combate 1968.

Cut off and surrounded, about 5,000 Marines and their supporting forces, including the men of Bravo Company, 1st Battalion, 26th Marine Regiment, seen here, successfully defended Khe Sanh Combat Base from three NVA divisions and about 20,000 troops during an 11-week siege in early 1968

General Huy who was the commander of North Vietnam army during the combate 1968- Next is the US Tank.
What has become known as the Siege of Khe Sanh began on January 20-21, when the NVA launched a series of coordinated attacks against American positions. The NVA 6th Battalion, 2nd Regiment, 325C Division attacked the Marines on Hill 861, while the NVA 7th Battalion, 66th Regiment, 304th Division, attacked the Huong Hoa District headquarters in Khe Sanh Village. The fight was intense. Defenders involved in the attack included the South Vietnamese militia as well as U.S. Army advisers and Marines attached to a Combined Action Company platoon at the KSCB. Those forces were pinned down and escaped with the assistance of Niagara operations and airlifts by the 1st Air Cavalry (Cav) Division.

Khe Sanh Museum
Operation Pegasus (April 1-15, 1968) called for elements of the 1st and 3rd Marine Regiments to attack up Route 9 towards Khe Sanh, while the 1st Air Cav moved by helicopter to seize key terrain features along the line of advance. As the Marines advanced, engineers worked to repair the road. Operation Scotland II began the day Pegasus ended and lasted until July 11, when the Marines were withdrawn from the area. Essentially a police action, the 3rd Marine Division assumed responsibility for the KSCB and began actively seeking out NVA forces in the Khe Sanh Plateau and the western portion of the Quảng Trị Province.

Map of Quang Tri and the DMZ Vietnam

We are a private and professional car rental company, head office based in Hanoi city capital of Vietnam, we have been providing car/ van rental services in Vietnam for over 17 years now, with large choice of private car/van/bus for working, business trip, family travel, also group tours for tourist, student groups...
Our private cars and coachs are all new, from standard to Luxury vehicles, limousine vans.
Our professional car rental services 24 hours a day, 7 days a week to and from all major Vietnam airports such as Noi Bai (in Hanoi), Danang (in Danang),  Tan Son Nhat (in Hochiminh city) International Airports, Phnompenh and Siemreap (Cambodia), Vientiane and Luangprabang (Laos) Yangon (Myanmar) Our prices remain consistent, there are no hidden costs and our customers rely on guaranteed quality service.  By using our online booking service, you can be assured that our drivers will be there to greet you at the Arrivals or Pick-up address on time. Advanced 24 hours booking reservations are required if you wish to use our online booking service.  To take advantage of our excellence in taxi service and for any special arrangements, we recommend you phone or email us 24 hours before your arrival/departure.  Our Transportation Services include: + Airport Transfers : Hanoi, Hai phong, Dong Hoi, Hue, Danang, Nha Trang, Dalat, Hochiminh, Can Tho, Phu Quoc + Seaport Transfers: Hai Phong, Cai lan (Halong), Tien sa (danang), Chan may (Hue), Vung Tau, Saigon + Long journeys departing from:  Hanoi, Hue, Hoi an, Nha Trang, Hochiminh, Can Tho
+ Long journeys cross border (Vietnam-Indochina):  Vietnam- Laos ( from Hanoi to Vientinae or Luangprabang), Vietnam-Cambodia (from Ho Chi Minh city to Phnompenh or Siemreap) Day Bookings also available! You can book a car/ Bus for a whole day or for a few hours for which the service will be charged at an hourly basis.


- Airport transfer Exclusion of:  Overnight parking fee (outside the cities of Hanoi and Ho Chi Minh).

And all other not mentioned in the routings


View our car, van, bus for hire in Vietnam-Laos-Cambodia-Myanmar 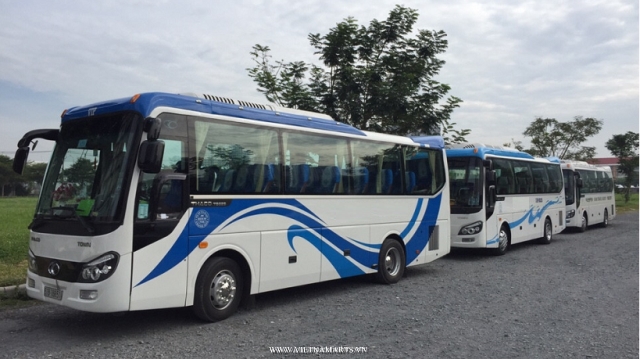 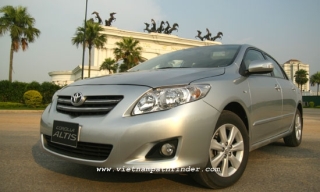 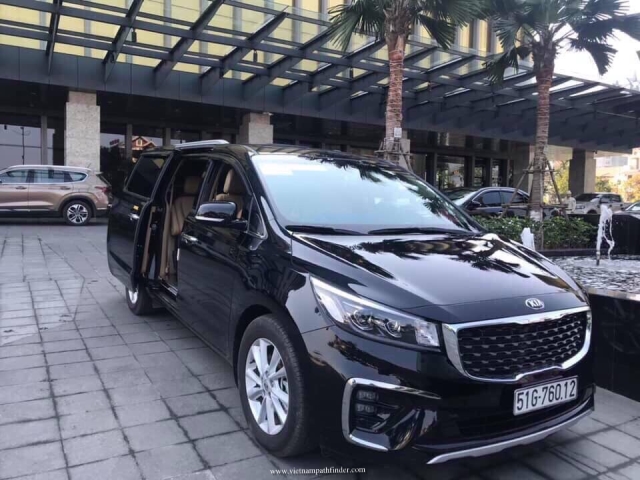 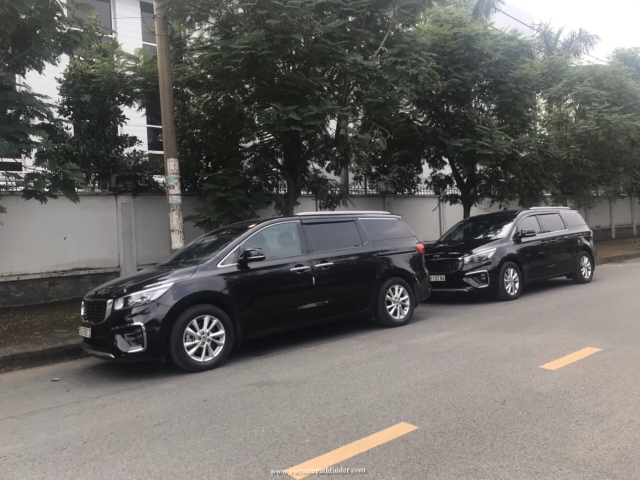 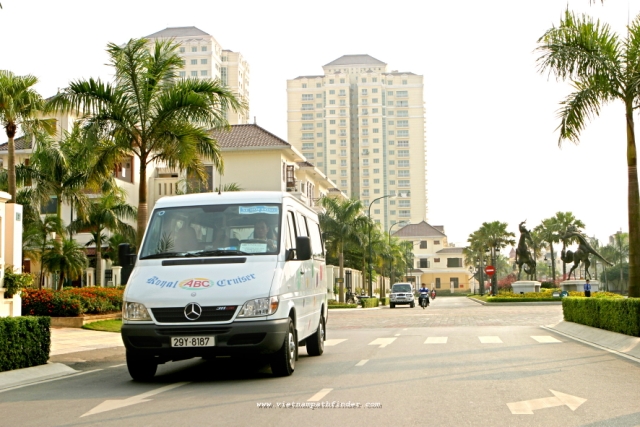 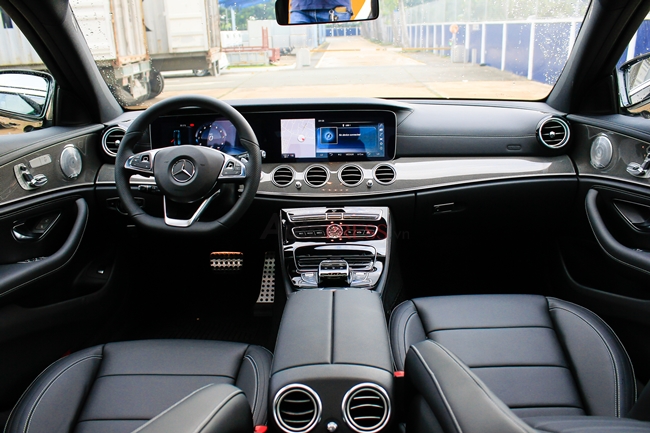 Vietnampathfinder commitment is the delivery of bespoke, safe and best services
With a focus on experience, guest safety, quality control and service delivery,  we will check every details to make sure that our travel sevices or your booking travel with us a most enjoyable. Each request is dutifully responded to within 24 hours unless negotiations and special requests are required on your behalf; our team of Vietnampathfinder will ultimately inform and follow up or you also can call us any time at 084. 913323 977 (Mr Pham).

100% of the total car rental costs to be paid upon commitment of the car rental.

We do accept payment methods:

+ Credit card = 2.7% bank fees is levied in addition to the invoiced amount. Kindly make sure you include the invoice number or contact our Accounting Department for an invoice number so that your payment can be identified. Please also check with the bank who issued your credit card to ensure that no other bank fee is applied.

+Cash on arrival: we accept in some cases with 50% deposit by paypal or credit card online and the balance of 50% by cash on arrival Vietnam (collect by tour guides, drivers directly from tour leader or your clients).

+ To ensure our cars are not being used for any for any illegal or immoral purpose
+ Our cars and drivers will refuse to carry passengers who not in the booking list (Names) or Number of People in the party at booking confirmation.
+ Pick up location changes must to inform us at 12 hours before departure and will be applied the surcharge if over 3 km from the original booking
+ For airport pick up, if the flight will delay for over 1hour, we will apply the surcharge for 50% and over 2 hours will charge 100% (as a new booking car)
+ Incorrect information such as arrival flight numbers, gate number, dock number, hotel names, passenger names, border gate names, arrival visa trouble will be considered as the services done and renew ones will be full charged
+ We will not agree if you take the wheel as a part of safety reasons, our drivers are licensed to do this job.
+ Our drivers can refuse to drive you to the sites that out of our booked schedules/ itineraries, surcharge will be applied upon request

Any cancellations should be made in writing to VietnamPathfinder Travel (email at: info@vietnampathfinder.com ). Cancellations beyond your control subject to Force Majeure can be covered under travel insurance. We recommend you buy Travel insurance before you complete payment of your travel and review its relevant product disclosure statement. Cancellation fees of loss of deposit will be applied if a confirmed booking is cancelled 22 days or more prior to arrival date

For bookings that are cancelled by the passenger or agent 21 - 15 days prior to arrival date, loss of 50% of the total car rental cost will be applied.

For bookings that are cancelled by the passenger or agent 14 - 8 days prior to arrival date, loss of 75% of the total car rental cost will be applied.

Vietnampathfinder reserves the right to claim 100% of the total car rental cost should the cancellation happen within 7 days before departure.


We reserve the right to modify these cancellations & refunds policies without prior notice.

Last minutes bookings if the bookings are made in 72 hours, 48 hours or 24 hours before departure

Less than 24 hours before your trip departure, please email us  at: info@vietnampathfinder.com or Call at 084 913323977 and only process the final booking on our website when get confirmation emails from our sale teams.

Refund and amendment will not be applied for last minute bookings.

We will request a special surcharge during 3days of Vietnam Tet Lunar New Year, this surcharge is added further 20%/ each day (during 3days of Tet Holiday period) and will inform you before process the booking our car

Hope you would like the information!
Should you have any question, please don’t hesitate to write us, we are here to help!
With appreciation for your:
Tweet