Cu Chi tunnels, a former war battle site that located some 50km in the north of Saigon, there was some 10.000 Vietnam who lived under the tunnel during the Vietnam wars again the US army

This is the site of the Cu Chi tunnels, one of the most famous battlegrounds of the Vietnam War. Today it is one of the country's prime tourist attractions, part of a new industry of war tourism. Sometimes, these spots seem to be memorials to wartime propaganda as much to the war itself.

Communist forces began digging a network of tunnels under the jungle terrain of South Vietnam in the late 1940s, during their war of independence from French colonial authority. Tunnels were often dug by hand, only a short distance at a time. As the United States increasingly escalated its military presence in Vietnam in support of a non-Communist regime in South Vietnam beginning in the early 1960s, North Vietnamese and Viet Cong troops (as Communist supporters in South Vietnam were known) gradually expanded the tunnels. At its peak during the Vietnam War, the network of tunnels in the Cu Chi district linked VC support bases over a distance of some 250 kilometers, from the outskirts of Saigon all the way to the Cambodian border.

The 2 girls at entrance way of Cu Chi tunnels, they still use the uniform of Vietnam during war year 60'

Following the man in green fatigues, the tourists arrive at an open-sided hut, where the women in black show them to their seats. There, on a big-screen television set, the Vietnam War plays on: B-52's drop strings of bombs, villagers run for cover, communist guerrillas fight back.

before going to explore the Cu Chi tunnels at ben duoc, visitor will see a video clip of the battle was in this area last 35years

and some tourist can even try to enter the tunnels, some parts of Cu Chi tunnels is around 120m and all people can go in

on the way, you will see many entrance way that to lead into the tunnels (some time, you will get out from other exit way that few hundred way) 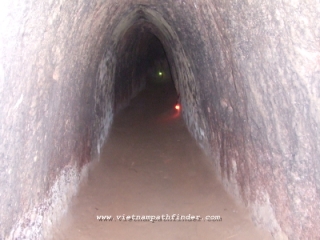 VC soldiers lurking in the tunnels set numerous booby traps for U.S. and South Vietnamese infantrymen, planting trip wires that would set off grenades or overturn boxes of scorpions or poisonous snakes onto the heads of enemy troops. To combat these guerrilla tactics, U.S. forces would eventually train some soldiers to function as so-called “tunnel rats.” These soldiers (usually of small stature) would spend hours navigating the cramped, dark tunnels to detect booby traps and scout for enemy troops.

Entrance to the tunnels of cu chi 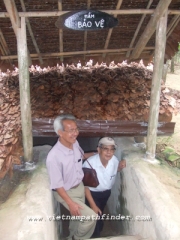 Two Vietnamese Veterans at an entrance to the Cu Chi Tunnels

As the United States relied heavily on aerial bombing, North Vietnamese and VC troops went underground in order to survive and continue their guerrilla tactics against the much better-supplied enemy. In heavily bombed areas, people spent much of their life underground, and the Cu Chi tunnels grew to house entire underground villages, in effect, with living quarters, kitchens, ordnance factories, hospitals and bomb shelters. In some areas there were even large theaters and music halls to provide diversion for the troops (many of them peasants) and their supporters. 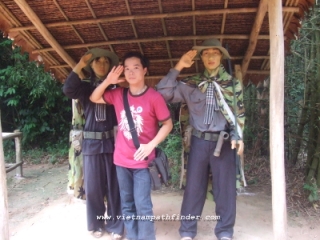 In January 1966, some 8,000 U.S. and Australian troops attempted to sweep the Cu Chi district in a large-scale program of attacks dubbed Operation Crimp. After B-52 bombers dropped a large amount of explosives onto the jungle region, the troops searched the area for enemy activity but were largely unsuccessful, as most Communist forces had disappeared into the network of underground tunnels. A year later, around 30,000 American troops launched Operation Cedar Falls, attacking the Communist stronghold of Binh Duong province north of Saigon near the Cambodian border (an area known as the Iron Triangle) after hearing reports of a network of enemy tunnels there.

After bombing attacks and the defoliation of rice fields and surrounding jungle areas with powerful herbicides, U.S. tanks and bulldozers moved in to sweep the tunnels, driving out several thousand residents, many of them civilian refugees. North Vietnamese and VC troops slipped back within months of the sweep, and in early 1968 they would use the tunnels as a stronghold in their assault against Saigon during the Tet Offensive

Life of VC under the tunnels

You can now crawl through some of the safer areas of the tunnels, view command centers and booby traps, fire an AK-47 rifle on a firing range and even eat a meal featuring typical foods that soldiers living in the tunnels would have eaten.

A native of Harlem and the South Bronx in New York City, Powell joined the Reserve Officers’ Training Corps (ROTC) at the City University of New York and upon graduation was commissioned as a second lieutenant in the U.S. Army. He served two tours of duty in Vietnam, from 1962-63 and 1968-69. In 1963, Powell was wounded by a punji-stick boby trap near the Vietnamese border with Laos; he was awarded the Purple Heart and later the Bronze Star for his injuries. During his second tour, he was injured in a helicopter crash, though he managed to help his fellow soldiers from the burning aircraft and earned the Soldier’s Medal for his actions.

After Vietnam, Powell continued to rise in the military ranks, winning the post of national security adviser to Ronald Reagan in 1987 and chairman of the Joint Chiefs of Staff under George H.W. Bush. He retired from the military in 1993. Despite widespread encouragement to run for president in the 1990s, Powell declined to throw his name into the ring, and in 2001 he became the country’s first African-American secretary of state, in the administration of George W. Bush.

For Cu Chi TunnlesTrips in Vietnam Package Tours, Please email us at: info@vietnampathfinder.com